Kinnaur is traditionally a very cold and snowy area. Due to this, the food that was eaten here used to be frugal and rich in nutrients. Typically food providing warmth to the body is traditionally eaten.

Though most often people prefer eating nonvegetarian food, there are vegetarian dishes available too. The main reason for this is also owing to the extremely cold climates.

The locals mainly eat Barley here. Since the cultivation of staples like rice and wheat is more difficult in this terrain, Kinnauris usually eat barley as their staple bread.

But do not worry if you are visiting as a tourist and are habitual to eating rice or wheat, most restaurants serve rice especially during lunch or dinner.

Meals during the day

The Morning breakfast is called as Ken or Tshema. This is usually consisting of Rotis and flatbreads served with some accompaniments.

The Lunch is called Shod. Chicken is usually a very integral part of lunch and forms the staple diet of most people.

Dinner is Yangskin or Gongal. Depending on various regions, different meats are served. For example, in upper Kinnaur, it is quite common for a few communities to have yak meat during their meals.

Though we would advise you to try out the special Parathas ( flatbreads ) made of barley, buckwheat or amaranth. 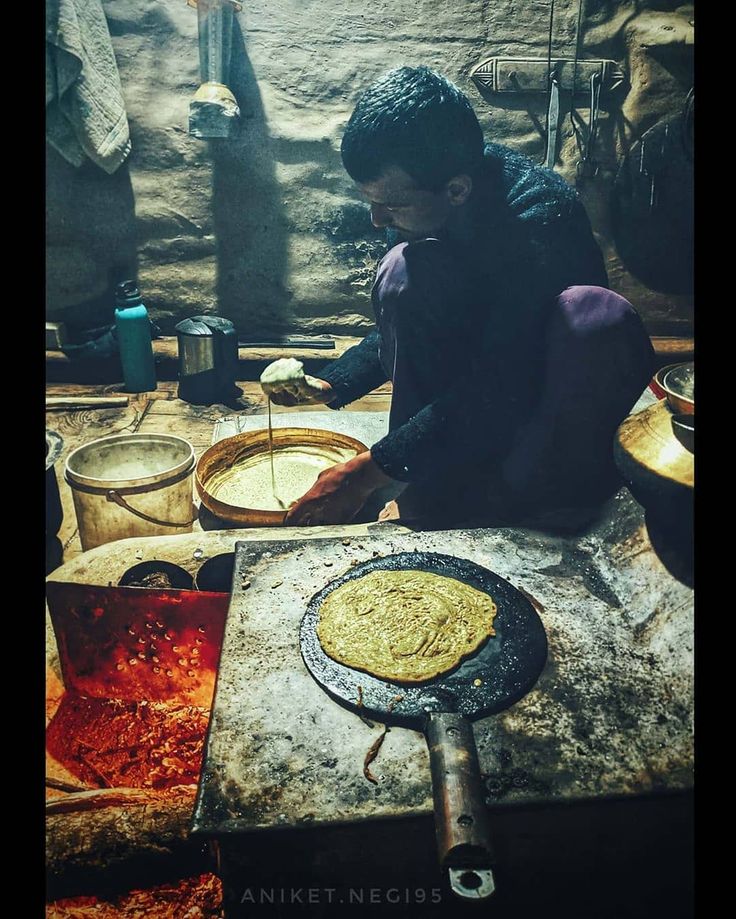 Tsampa is a baked cake made from the barley flour. The barley is groud and kneaded and is used to make this special paratha.

Buckwheat flour is used to make Chilta. This is typically like roti but more bitter in taste. Its sweeter variety is called as the Olga.

The main course and accompaniments

For vegetarians, you can try out the Phanting. This is a special gruel made by wild apricots that are later cooked in water and salt.

There are various other sabzis locally available which when added with spices make for very tasty curries. These include cabbage, peas, pumpkin, turnips, and potatoes.

Non-vegetarians are in for a delight. You should especially be adventurous and you can enjoy some really delicious and tempting meats.

The local favorites include goat or ram’s meat which is cooked with Himachali spices. Chicken is also a staple in most diets.

Cha or Tea is the most common beverage drunk by everyone. It is a special type of tea and is drunk through various intervals throughout the day.

The tea is made by boiling a large amount of water with tea leaves, salt, butter, milk almonds, walnuts, and other spices.

This special slightly salty tea is fairly common all over the Himalayan regions and traces its origin back to Tibet’s famous buttered salty tea.

Himachal is very famous for the many local home-brewed beers available throughout the regions. Kinnaur is also home to such local brewed delights and makes sure you try some.

A variety of different ingredients can be used like apples, apricots, grapes, barley, or any locally produced fruit.

Angoori is a very tasty wine brewed from grapes and tastes like red wine. The brandy manufactured in Nesang is also very popular and can be tried by connoisseurs.

In the upper Kinnaur and near to Spiti, the Tibetan people are more common. Due to this reason. These regions are known for their very authentic Tibetan cuisine.

The most famous and tasty food is the momos which we all love eating. But do try these authentic momos when here to get a taste of the real deal.

From vegetables to lamb, they are made with a variety of fillings depending on the occasion or festival.

Another lesser-known entity is the Thupka or soup. This is very delicious and made with ingredients that help you keep warm on the inside. Dumplings are also added in some variants to give it richer texture and taste.

Yaksha or yak meat is a specialty of this region and eaten by the non-Hindu community. Tsampa i.e. vegetables or meat is eaten too. These can be eaten in the form of curries served with the Parathas or bread.

Thus, Kinnaur and its food provide you with some really adventurous ride on the taste buds. While you go trekking or skiing and enjoy some adrenaline, feed your body too with these heavenly and delicious local delights.

They say the way to a man's heart goes through his stomach. Indians love their spices and food a lot. From North to South, each area is known for some distinct cuisines and dishes which are famous only to their region. Himachal Pradesh refers to the state of the...