Ukhying or Fulaich is the festival of ‘fuls’ or flowers. It is a tribute to mother nature and flowers form an integral part of the worship for this festival. It is usually celebrated on the 16th of September and is celebrated over a period of 5 days. In the case of a leap year, it usually begins on the 17th of September.

Following is the account of the celebration of the festival at Nesang village in Kinnaur.

At the beginning of the festival, all the villagers are required to shift to a Pullu or hut made by them. It is mandatory for all the people with their families to participate in this festival. Though owing to modern times and jobs, there are certain exemptions.

In the nights, there is a beautiful custom where 2 families are tagged together based on a random lottery pick. It is called as Rogpo in the local language. In lower Kinnaur, it is also referred to as Zokhya Kushim.  On the first and second days of the festival, they cook and eat together which enriches their bonding. These couples are usually for 3 years but can be extended if both families love each other.

The males carry the traditional deity from the village temple beforehand in order to purify it in the divinity. Alcohol is then served as a part of the custom to the entire village and they reach the Ukhying grounds after sundown.

In the morning all the women are adorned in the traditional attires. They are then required to find a very special twinflower. Two women are selected on a rotational basis each year the night before. They go to the specific area and wait till the early morning to start searching for it.

This is very important since you can only commence collecting the other flowers after you find a special flower. If by unfortunate circumstances, they are not able to find the flower, then two separate flowers are tied together with some holy thread from the temple. A group of 5 men, representing the five Pandavas then set out to tie this special flower to a birch tree. It is believed that they should return to the village only in late-night or it’s a bad omen. There is another superstition that a brother-sister angel pair accompany them on the way back. So to ensure they do not return, the 5 men sing obscene songs and make sure they don’t enter. Strange and fascinating, ain’t it?

The next day all the people dress up in very pretty and authentic traditional attires. The women wear a choli and dodhu with a gacchi clenched at their waist. The men wear Chuba and Suton along with the special half jacket, bas-coat.

The special dance called Kayang is then performed where the villagers arrange themselves in an orderly fashion. The dance is completed only in an anti-clockwise direction with the Pandavas in the center dancing in clockwise. After Kaar or the traditional Deity program is completed, it is an open dance floor.

The eternal fire burning on the sacred grounds should always be burning. A zamindar is appointed to ensure an ample supply of firewood and entrusted with the responsibility of keeping the fire burning.

The main event on day 3 is Poldashon. The deity is carried here for a special dace. On this day, there is no specific way to dance. Everything is fun and joyous as the people all hold hands and dance playing mischief too.

On this day, The villagers with the honorable Govind Lama visit a place called Naija. They all go to a cave where Nesnag Rinpoche or Guru Rinpoche meditated. They pay their respects, have holy water, and then return to the grounds. All the villagers assemble together and have a community lunch.

The three peaks visible here are very beautiful to look at but combined with the festive fervor, they seem to light up in joy. They are also attached with some astrological significance too. On the way back, they throw pine cones as well but only at your brother or sister-in-law.

The entire clan returns to their villages. After that, a male member from each family again comes to the grounds to partake in taking the divine deity back to the village.

Each person leaves the grounds through a special area between 2 rocks. The souls of the deceased who have not found salvation are said to visit during the Fulaich. They are also given food and drinks. The villagers hence drink holy water and exit only through the specified passageway in order to fend off the spirits from returning. The villagers return only after sunset. 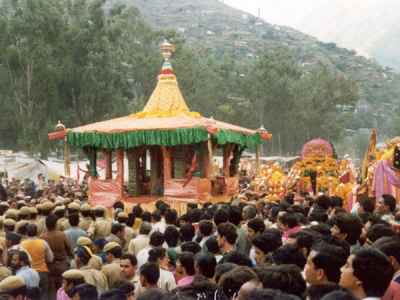 After that, the men are welcomed back with the deity by the women. They hold incense sticks and alcohol is offered. The deity is circled around the village temple square thrice before it is finally settled back inside the sanctum.

Thus, ends this beautiful and very traditional festival of Ukhying.