Skip to content
By: Posted on January 1, 2016January 29, 2020
The three more or less parallel high mountain ranges – Zanskar, Greater Himalaya and Dhauladhar Range – Meet at Kinnaur, located in the northeast corner of Himachal Bordering Tibet. The narrow and deep valleys are green in lower and middle Kinnaur but in the higher elevations are barren as they are burnt by the sun’s heat and therefore devoid of moisture.
Kinnaur, part of the erstwhile Bushahr State, was a subtehsil of Mahasu district before becoming a separate district in May 1960. It derives its name from the Kannaura or Kinnora, the original inhabitants of the region. 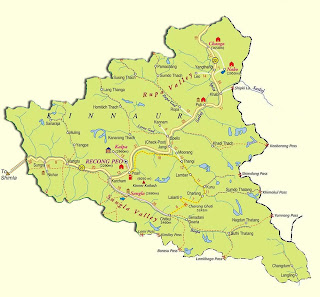 This district was opened for visitors in 1989. Foreign nationals require a permit to visit even today whereas Indian nationals can enter the district without any restrictions.
It is believed that the Pandavas lived here while in exile. Ancient traditions, beliefs and Buddhist monasteries established thousands of years ago point to the richness of the culture here. The main Hindu Deities of Kinnaur are Durga or Chandi. Bhairon, Usha or Ukha, Narayan, Vishnu, Badrinath and Bhimakall. Nag is also worshipped.
Kinnaur has been a major Trans-Himalayan corridor for centuries. Traders Travelling between China and the Punjab plains passed through the Hindustan – Tibet route for their business. Well-watered, lower and middle Kinnaur’s beauty ranges from the subtropical to alpine. The valleys have some of the most interesting meadows, view points, lakes and lush green pastures in the state. Rinchen Zangpo (AD 958-1055) is credited with the spread of Buddhism here. He passed through this region on his way home from the plains where he had been sent by King Yeshod to absorb Indian Buddhism.

What is the first thing that you'd do after waking

The shot is from a usual spot just before Lamayuru

This urban chaos that we call Shimla ❤️ Shiml

🌺Kinnaur Himachal Pradesh “When she smiles,

I'm a person of the mountains and the open paddock