Honeymoon in Bhutan: The Land of Happiness

The period of honeymoon is when newlywed couples take a break to share some private and intimate moments that helps establish love in their relationship. The privacy of a couple is the thing that is believed to ease the comfort zone towards a better relationship, which also acts as one of the primary means of bonding during the initial days of marriage. Honeymoon also allows a better understanding between both the partners so as to help them lead a beautiful and peaceful love life.

Now coming to why Bhutan is known as the paradise of honeymoon. Bhutan is the land of thunder dragons, ancient temples and fortresses. Bhutan also offers some of the best natural beauty in the world and Bhutan also houses a plethora of cultural treasures. In Bhutan, you won’t get to see more tourists but instead, you see more couples which are walking hand in hand or sitting and chatting in a park which actually will benefit you in opening up in front of your partner rather than between tourists who will be observing your actions. Since it is a natural human tendency to often feel comfortable when the surroundings and situation around them are as per their demand. Therefore, honeymoon in Bhutan is a dream come true for newly wedded couples hence, making it the hotspot for the honeymoon in the World.

Gear up couples we are going on a journey of a romantic land,

Well couples, our first romantic stop is Paro valley. This is one of the most historic valleys of the country, Paro Valley is a must-visit place on your honeymoon in Bhutan trip. Being the centre of trade and invasion by the Tibetans, the valley has the closest cultural connection with Tibet in relation to any other district in Bhutan. The boutique villas facing the beautiful pine forest valley makes a jaw-dropping view and making Paro valley an important honeymoon destination in Bhutan.

Key attractions to visit: Taktshang Tiger’s Nest monastery, the oldest temple of Kyichu Lhakhang, Drukgyel Dzong, view of the pine-forested valley, the massive fortress of Rinpung Dzong, and the National Museum of Bhutan.

Next up in honeymoon in Bhutan is a place without which your honeymoon would be incomplete which is the new village of Trongsa. The long history of the Wangchuck kings can be seen from the forts of the district, with the picturesque views of the mountains in the backdrop. This village offers some of the best natural views in the whole of Bhutan. Trongsa also offers some of the best backdrops for a perfect couple picture.

Next up is the capital and the largest city of the country, Thimphu which is one of the most preferred honeymoon destinations in Bhutan. The colorful weekend market with its quirky shops, museums, and popular landmarks will make your honeymoon in Bhutan a memorable one. Thimphu is also placed at a staggering height of over 7600  feet. Thimphu is also a storehouse of traditional Bhutanese art, architecture, culture, and tradition and above all staying in Thimpu is so ethnic and pure. The wooden houses stand side by side with concrete buildings, all painted and constructed in traditional Bhutanese styles which will also perfectly stand out for a beautiful backdrop for your couple pic.

Next up is this beautiful valley which houses the most ancient temples and sacred sites in Bhutan. From trekking to the burning lakes and from forts to temples, Bumthang ensures a great honeymoon in Bhutan for all the couples which stay here. Bumthang comprises four valleys: Chokhor, Tang, Chhume and Ura. Ura will perhaps be the pick of all these with a traditional village and almost medieval atmosphere. On the far side of the Black Mountains, you will enter a part of the country that until the 1970s was only accessible by mule and foot trails. Besides natural beauty, the four valleys are blessed with some of the oldest Buddhist temples in the kingdom. It was here that Buddhism was first introduced to Bhutan and where the legendary saint Pema Lingpa was born, to whom the Bhutanese royalty trace their descent. This is a great hotspot for natural beauty pictures of couples. 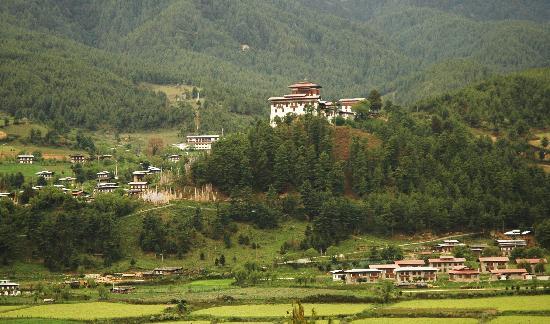 This is one of the most beautiful spots in the country, the Gangtey valley which is a picturesque destination for your honeymoon in Bhutan. The Gangtey Valley, also called Probjikha Valley, is the winter home to a group of globally endangered black-necked cranes that arrive every year from the Tibetan Plateau. Gangtey boasts its own important religious sites such as the Gangtey Goempa Monastery, which is situated at the head of the valley, and it also tends to offer some exceptional views. Couples must visit the Black Necked Crane Information Centre, situated on the edge of the forest and wetland along the main road of Gangtey, the black-necked crane information Centre has an observation room equipped with high power telescope and spotting scopes for catching the best view of the cranes. Couples can get a perfect view of the environment in which the birds stay and can also get to see natural beauty from behind the lens which is a first-hand experience.

Recommended Read: Best Bollywood Travel Songs You Can Get Inspiration From

In the end is this erstwhile capital of the country, Punakha which is also another of a must-visit place on your honeymoon in Bhutan trip. A relatively warmer city, winters are pleasant and hence it is better to visit Punakha in Bhutan for a honeymoon in winters. Punakha is the winter residence of the central monk body, the summer residence being Thimphu. With the Phochhu and Mochhu rivers flowing all throughout the valley, this is the reason why the  fertile land of Punakha is popular for growing organic vegetables, fruits and rice. Khuruthang is the main town of Punakha which is about four kilometres from the Dzong. It is one of the most beautiful valleys in the whole world which every year attracts more and more number of couples towards itself. Couples it has truly been one of a kind experience for me to write on this and I also wish that your honeymoon in Bhutan turns out to be a one of a kind experience. Bhutan is truly living up to its name as a honeymoon destination in the World. This is one of the places which will bring that smile on your partner’s face and will also make them open up to you which in turn will help in knowing your partner well and the bond with your partner will for sure get stronger after your honeymoon in Bhutan. These all benefits will take place when they see the beauty of Bhutan be it in its Fortresses, natural beauty of nature and also in its culture. So couples in the end if somebody asks you advise on where to go for honeymoon then you will tell them to go for their honeymoon in Bhutan after you visiting that place with your partner obviously.

These Stunning Villages in Himachal Pradesh, India Will Take Your Breath Away

The north Indian state of Himachal Pradesh brings in millions of tourists from across the world every year, owing to its captivating scenery. Characterized by snow-clad mountains and serene natural beauty, this ‘Abode of Snow’ is home to hundreds of villages, all beautiful in their own right. Read on to discover a few of the highlights on These Stunning Villages in Himachal Pradesh, India...

10 Offbeat Things to do in Spiti Valley

Dreaming of the high Himalayas? Take my listing of outstanding experiences and lesser-known 10 Offbeat Things to do in Spiti Valley. [caption id="attachment_6290" align="alignnone" width="1280"] Image Source[/caption] Climb with me to the mountains on the roo...

With a significantly difficult terrain and a panorama that is drop-dead gorgeous, the Spiti valley makes for an amazing journey destination. There are locations in India that are outlined using treacherous alleys and lie buried below stiffened snow for the most sec...

How To Become A Travel Blogger And Get Paid To Travel

Tired of your old desk work? Planning on quitting the job for a trip across the globe? But you need not stop working or even drain your bank account to spend your days travelling. With the right skill set and well-thought-of career choice, you can well end up in on...