All the adrenaline rush seekers and water lovers Lo and Behold! This article contains some of the best destinations for water rafting in India. In India, this is more of a new and trendy water sport which is unheard by many but all thanks to technology, this sport has caught limelight in India especially with youngsters which have caused most of the family tour operators to include water rafting in their itineraries. There is no doubt that water rafting in India has caught the fancy of not just adventurists or adrenaline rush seekers but also of tourists and travellers.

Since India has many rough rivers which test out people’s endurance, hence some of the best destinations for water rafting in the world are in India even though the numbers are less but yet they are amongst the best. I have also included grades which can help you differentiate between difficulty levels of the rapids, Grade I is the basic level rapids, Grade II and Grade III indicates that the water rafting destination has moderate difficulty rapids and finally Grade IV and higher which indicates that this spot has extremely difficult rapids and should only be tried by professionals. Alright, enough of talking now let me take you on a small tour of some of the best destinations for water rafting in India. Get your water rafts ready and hold on tight the ride might get a little bumpy!

First up we arrive at the best destination for water rafting in India and that is the mighty Indus river. This river is also one of the longest rivers in Asia. The river is also known as the Sindhu river and stretches for approximately 3,180 km. Many refer Indus as ‘Singhe Khababs’, since the river has several rafting points such as:

Rafting in the Indus river is truly one of a kind experience and should not be missed at any cost since it is made for amateurs and those thrill seekers who wish to quench the thirst of their adrenaline rush. This is also an experience that you’ll cherish all throughout your life.

Types of rapids: Grade I rapids

Second in the list of best destinations for water rafting in India, we come down from Ladakh to Coorg situated in Southern India. This river has its own name in the rafting world since it provides all its riders an adventurous ride with loads of thrill which are in the form of rocks and rapids. The Coorg’s river Barapole, mainly the upper part of this river offers an exceptional white water rafting in India. This river of Dakshina Kannada is situated on the Deccan Plateau in the Western Ghats. The river is divided in two sections – One which is the upper section which gives white water river rafting and the lower section which offers a rafting with equally many thrills as the upper section but without the white water flowing around you. But there is another plus point in the lower section of the river and that is, that there are more number of rapids in the lower section of the river than in the upper section of the river. There are different types of grade rapids which you are ought to hear from your instructor and some of them are Milky Churn, Morning Coffee, The Ramba Sambha, Grasshopper and The Wicked Witch.

Types of rapids: Grade IV to VII rapids which are extremely challenging

Best Season to go: July to September and the monsoon as well 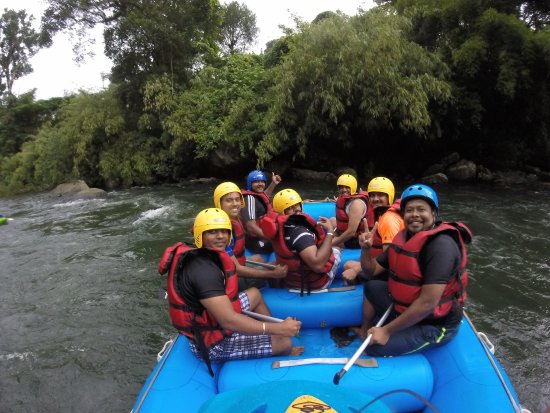 Third in the list, we come to the most prominent destination for white water rafting in India which is in Kullu and Manali. In this river rafting, you can sail on the beautiful river Beas and enjoy the scenic water flowing around you but don’t be fooled by the scenic landscape around you as this river is famous for the thrills it provides as you can expect surprises springing right at you from any corner. In the Kullu valley, the river rafting commences at Pirdi. It goes up to Jhiri covering a stretch of about 14 km. Most of the rapids found here are strong enough to leave a deep and an exhilarating impression on your memories. But the picturesque scenery of the river Beas and the extremely thrilling rapids is certain to make the day of river rafting on this river a memorable one for all the adrenaline rush seekers out there.

Types of rapids: Grade I to Grade IV 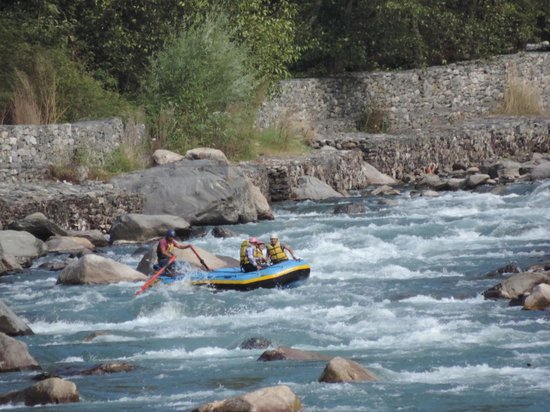 Now we come down to fourth on the list and that is River Ganga which is infamous for its relentless and thrilling rapids. The river Ganga is another of those places which you wouldn’t like missing out for river rafting in India. The best place for river rafting is Rishikesh which is situated in Uttarakhand’s Garhwal Himalayas. Here you have an option of choosing the stretch of river rafting based on the difficulty level you can take. There is a 16 km stretch in Rishikesh that takes you from Shivpuri to Lakshman Jhula. This river is also famous for a part of rapids and whirlpools that has been tried by Brad Pitt himself!

Here are some of the rapids which are given some quite amusing names such as the Three Blind Mice, Tee off and Golf Course, Return To Sender, Double Trouble, Roller Coaster etc. This stretch also houses some of the best beautiful landscapes in the world and that is Kumaon Mountains and also the white sandy beaches. There are many stretches and those are the 26 km stretch from Chandrapuri to Rudraprayag which has a plethora of rapids, 12 km long stretch from Matli to Dunda that has moderate difficulty, another 12 km long stretch from Dharasu to Chham, Harsil to Uttarakashi set on the river Bhagirathi and there is one more stretch of 20 km from Jangla to Jhala that has many rapids.

Types of Rapids: Grade I to Grade IV

Now we are nearing the end of our journey but how can we not meet the Northeastern part of India. And so here we are in North East of India where a river by the name Lohit flows, which is one of the tributaries of the great Brahmaputra river and is situated in Arunachal Pradesh. The river rafting starts from the Line of Actual Control stretching to the Hayuliang. This river isn’t that famous like the others but is still known throughout the whole world for its surprising rocks and relentless rapids which appear within a fraction of a second. These features have made it a great spot for kayaking and river rafting in India as the thrill seekers often find their way here to get that shot of adrenaline rush and that extreme excitement of surprising rapids.

Recommended Read: 7 Weekend Getaways Around Delhi NCR to Relax and Rejuvenate This Weekend

Now we come to the end of the list that is the 6th position is held by another popular river, the Spiti river situated in Himachal Pradesh. This water rafting experience spreads over a distance of 180 km and the river spans from Tuting region and goes up to Pasighat. The whole rafting experience which ends at Sumdo takes about 6 days to finish. This rafting experience will test your endurance limits and test you by throwing different types of surprises at every corner moreover you must keep patience in this type of rafting experience which will definitely show you your limits. But the biggest advantages in this rafting journey is the delightful and serene view of the pristine villages and valleys of the Himachal Pradesh which will definitely leave you awestruck.

Well, this message is to all the adventurists and adrenaline rush seekers out there, Remember that in all of these spots you visit in this article, they will test you to your breaking limits and will eventually make a new and a better person at the end of your rafting experience. In the end, believe in yourself that you can overcome the difficulties this rafting experience will throw at you and you will overcome all your difficulties and whenever you feel all hope is lost then remember to look at nature which would be motivating you from the sidelines!

These Stunning Villages in Himachal Pradesh, India Will Take Your Breath Away

The north Indian state of Himachal Pradesh brings in millions of tourists from across the world every year, owing to its captivating scenery. Characterized by snow-clad mountains and serene natural beauty, this ‘Abode of Snow’ is home to hundreds of villages, all beautiful in their own right. Read on to discover a few of the highlights on These Stunning Villages in Himachal Pradesh, India...

10 Offbeat Things to do in Spiti Valley

Dreaming of the high Himalayas? Take my listing of outstanding experiences and lesser-known 10 Offbeat Things to do in Spiti Valley. [caption id="attachment_6290" align="alignnone" width="1280"] Image Source[/caption] Climb with me to the mountains on the roo...

With a significantly difficult terrain and a panorama that is drop-dead gorgeous, the Spiti valley makes for an amazing journey destination. There are locations in India that are outlined using treacherous alleys and lie buried below stiffened snow for the most sec...

How To Become A Travel Blogger And Get Paid To Travel

Tired of your old desk work? Planning on quitting the job for a trip across the globe? But you need not stop working or even drain your bank account to spend your days travelling. With the right skill set and well-thought-of career choice, you can well end up in on...